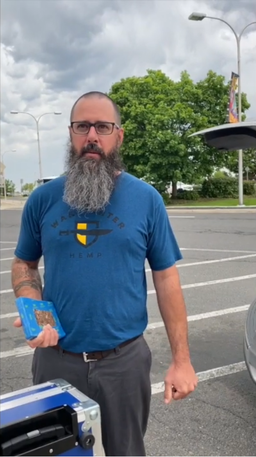 Ben Hayhurst holds the piece of steel I-beam from a World Trade Center tower that he'll use to forge a symbolic axe for struggling firefighters.
Veteran and Purple Heart recipient Ben Hayhurst created the Spartan Axe in an effort to help mitigate the suicide rate amongst first responders.

Firefighters share a common bond with police officers and soldiers. Their job is to respond to the most dangerous of situations and protect the rest of us. That kind of pressure takes a toll. Many firefighters die early from stress-induced illnesses. Others take their own lives.

The September 11 bombings were traumatic for most Americans, but especially for the police officers and firefighters of New York. They worked in hazardous conditions. They recovered bodies. They had to be strong for a grieving city.

That has taken its toll. Hundreds of first responders have died because of conditions related to their work at Ground Zero.

Spokane Fire Chief Brian Schaeffer says firefighters all over the world deal with similar pressures.  “You don’t really know if you’re going to come home at the end of your shift. That’s always an outlier. That’s always in the back of our minds, from firefighters to police officers, military. We have the expectation that if the order is to sacrifice your life for somebody else’s so that somebody else can live, that’s what we will do," Schaeffer said.

To honor that ethic, Elk, Washington military veteran Ben Hayhurst created an axe whose head was made from two pieces of metal several years ago.   One was salvaged from the World Trade Center, one from a New York firefighter’s axe.   “I took those two steels, those two pieces of steel, cut them in pieces and then forged them into a single block," Hayhurst said.

Over a three-week period, he worked the metal into the shape he wanted and then dipped it into a chemical that made the different metal from the two sources look distinct.   “As you look at it, you see these tiny thin little layers. There are 417 of those in there and each one of those layers corresponds with somebody who died, one of the rescue workers who died on September 11 and on Ground Zero," he said.

On the head of the axe, Hayhurst etched a version of the Spartan Pledge. That’s a two-sentence statement written about 10 years ago by a veteran named Boone Cutler. He was distressed by how many of his friends considered suicide after returning home from their service. The person who recites it vows to talk to a buddy before taking his or her own life.

“It’s just kind of a different version of the pledge because the original one was veteran based. We changed the terminology just a little bit to more suit first responders," Hayhurst said.

Ben Hayhurst says the process of creating the axe helped him work through some of his own service-induced issues.
“Getting your hands on the material and realizing the history of the piece of steel, the two pieces, it was, I don’t know if humbling is the correct word, just to work with the materials. It was sobering, I think is the correct term," he said.

Hayhurst’s Spartan Axe will be dedicated at Tuesday’s ceremony. Fire Chief Brian Schaeffer expects it will have an emotional impact on the people who work for him.   “The symbol of the axe is pretty prevalent in our culture. It represents tradition. It represents aggressiveness, pride in our craft and bringing part of 9-11, the Twin Towers, to forge an axe is representative of so many facets of our legacy," he said.

Schaeffer says his department has, over more than a decade, recognized the stresses of the job and the damage it causes.
“We brought on a psychologist in the department and from there, the psychologist and our people built a peer team and an outreach team and we’re constantly checking out people and bringing some of the newest science," he said.

The goal is to make the firefighters more resilient and better able to handle the unique stresses of the job. The hope is that when firefighters retire, they’re able to enjoy healthy lives.
​
As for Ben Hayhurst’s axe, it’s scheduled to travel to fire departments all over the country.

​When not on the road, its new home will be at the New York Fire Training Academy. 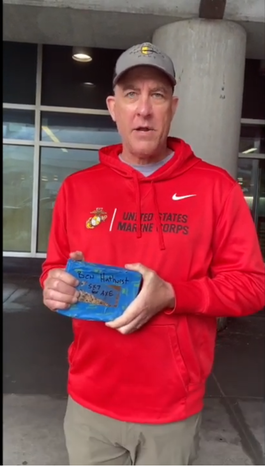 Retired Marine Lt. Col. Steve Danyluk holds the steel I-beam he procured in New York before hopping a plane to Spokane.
Several years ago, a Texas blacksmith created a small steel sword that is now used as part of a ritual aimed at preventing veterans from committing suicide. And now a disabled veteran from Elk, Washington is crafting a similar symbol for struggling first responders.

About four years ago, a retired Marine officer named Steve Danyluk and a friend, Danny Prince, were talking about the rising rate of suicides among military veterans. Danyluk runs a non-profit called Independence Corps, that helps vets. Prince is also a veteran and a retired firefighter.

“Danny pointed over to a shelf in his garage and said, ‘I’ve got about 30 pounds of World Trade Center steel over there. Maybe we can do something with that," Danyluk said.

He says that steel is an important reminder for Iraq War veterans, especially, of the importance of their service to the country.

“There’s a strong brotherly bond with the men and women of the New York Fire Department, or FDNY, just because that’s where, for us, from an emotional standpoint, that’s where it all started," he said.
​
Danyluk says the FDNY sometimes sends small hunks of steel from the towers to other fire houses. They thought of a retired Iraq War veteran named Boone Cutler, who created what he calls the Spartan Pledge.

“I will not take my own life by my own hand without talking to my battle buddy first. My mission is to find a mission to support my warfighter family,"

He sent the steel to a blacksmith in Texas, who fashioned it into the Spartan Sword. That’s a knife that’s now shipped around the country to ceremonies for veterans and first responders that include the reciting of the Spartan Pledge.

Danyluk decided to create a similar symbol specifically for firefighters. So he procured two pieces of iron that have ties to the Trade Center bombings and brought them west to Spokane, to a bladesmith named Ben Hayhurst.

“The two different steels we’re using, one is an axe that was used on Ground Zero. The other steel is a piece of I-beam that’s taken from one of the buildings, one of the Twin Towers," Hayhurst said.

Danyluk met Hayhurst through his non-profit.  “I’m a disabled veteran. I was wounded in Iraq in 2004 and part of the issues I deal with are mental health issues that come from my time in service. We’re starting to see numbers of that climb and climb among the firefighting community," Hayhurst said.

His job now is to make a fire axe, like the one used by firefighters at Ground Zero.  “It’ll be the same size as the original. The original is either a six- or a seven-pound fireman’s axe. It’s pretty large. If you were looking at it sideways in profile, it’s about four inches tall, probably about 10 inches long and it’s about an inch thick," he said.

Hayhurst has been creating prototypes. He expects the process of making his axe to take about two weeks. While he works at it, he may find himself lost in his own memories of 9/11.

“I remember very clearly when the towers were hit because I was with my unit when we were headed to a weapons qualification range. Everything about our life changed immediately right at that moment," he said.

Three years after that, Hayhurst suffered the injury that altered his life. He has since battled substance abuse and his own demons. That’s why being chosen to create the fire axe means a great deal to him.

“I feel extremely honored," he said.  "Mental health is something I’ve struggled with pretty heavily since getting home. To be a part of maybe helping some other people and all the meaning behind it, it’s overwhelming.”

Hayhurst hopes he’ll be able to take his creation around the country, like the Spartan Sword, and see for himself the healing powers of the fire axe.
© 2020 No text or photograph contained in the pages of this website may be reproduced without the expressed written permission of the artist and/A Touching Tribute: The Long War Memorial, a 501(c)(3) non-profit organization.