A Touching Tribute:  The Long War Memorial
is a 501(C)(3) nonprofit corporation.
​All donations are tax deductible.

​A Touching Tribute:   The Long War Memorial is the lead sponsor for this online exhibition of Art by First Responders.

The completed Memorial design consists of forming our fallen service members into groups of 200 and 120, ordered sequentially, so that year identification and grouping is represented; each group is further formed into the shape of a star that fits within a 100-foot circle. Each tag with its owner's name has a partner, the fallen warrior’s picture. The tags are corresponding, so when the lid closes, each photograph connects with its owner’s name. Finally, a single black tag is prominently included in the display, representing that military suicide awareness remains a large part of the overall memorial. The full arrangement of the memorial is designed for optimal viewing, along the outside perimeter looking toward the center of the star, either sitting or standing. Access is unobstructed to all tags, enabling tracings and reflection, as this memorial has been designed with an interactive approach in mind. An important aspect of the memorial design also involved specific consideration for accessibility. The table height, width, and overall design was developed to ensure that anyone and everyone has the same ability to take a personal moment with any of the fallen service members being honored. A flag representing each Branch of Service stands at each star apex, and in the center, the American flag is what joins these young service members and their sacrifices together. The use of wood types, shapes and contours, and colors were chosen to convey a sense of honor and beauty. From that beauty, if we can impart a split second of joy, then we are a part of the healing from the sacrifice this Memorial represents. ​ 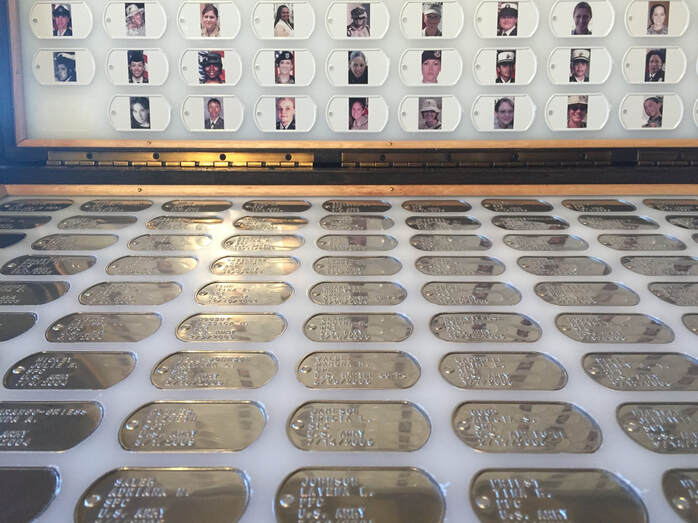 ​In early 2014, during a retreat for seriously wounded veterans, a group of artists banded together to develop a memorial that is wheelchair accessible and touchable.   Our design, A Touching Tribute:  The Long War Memorial, consists of combining the faces and names of every member lost in the Overseas Contingency Operations (OCO) of the United States.

A list of our fallen post-9/11 service members never seemed enough to us to represent the full meaning of sacrifice.   Our casualties should not be considered on the first loss, the second, the next, or the last.   Each casualty was a son, a daughter, a brother or sister, a wife, a husband, the father of three or the mother of one.   Each face of our fallen has been etched into the memory of someone who loved them.    Therefore, through a Touching Tribute:   The Long War Memorial, the names of our fallen are paired with photographs of the person behind the sacrifice.

Each tag with the Name and Other Identifying Information (OII) has a partner, the fallen warrior's picture.  The tags are corresponding, so when the lid closes, each photograph connects with its owner's name.   Finally, a single black tag is prominently included throughout the display, representing that military suicide awareness remains a large part of the overall memorial.

Photos and corresponding embossed tags, as well as the inserts that cradle each casualty, are made with exacting accuracy so when viewed in totality, they honor the precision of Military Unit Formations.

​The completed Memorial design consists of forming service members into groups of 200 and 120, ordered sequentially, so that year identification and grouping is represented; each group is further formed into the shape of a star that fits within a 100-foot circle. 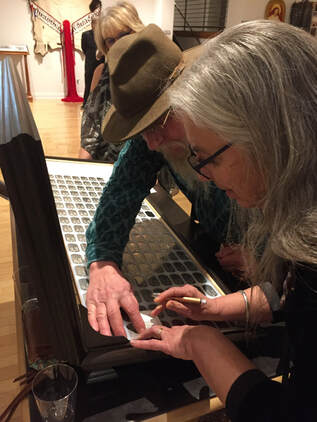 This memorial is designed for optimal viewing, along the outside perimeter looking toward the center of the star, either sitting or standing.

A flag representing each Branch of Service stands at each star apex, and in the center, the American Flag.

Access is unobstructed to all tags, enabling tracings and reflection.

The use of wood types, shapes and contours, and colors were chosen to convey a sense of honor and beauty.

From that beauty, if we can impart a split second of joy, then we are part of the healing from the sacrifice this Memorial represents.

Sacrifice has a name; And a face. 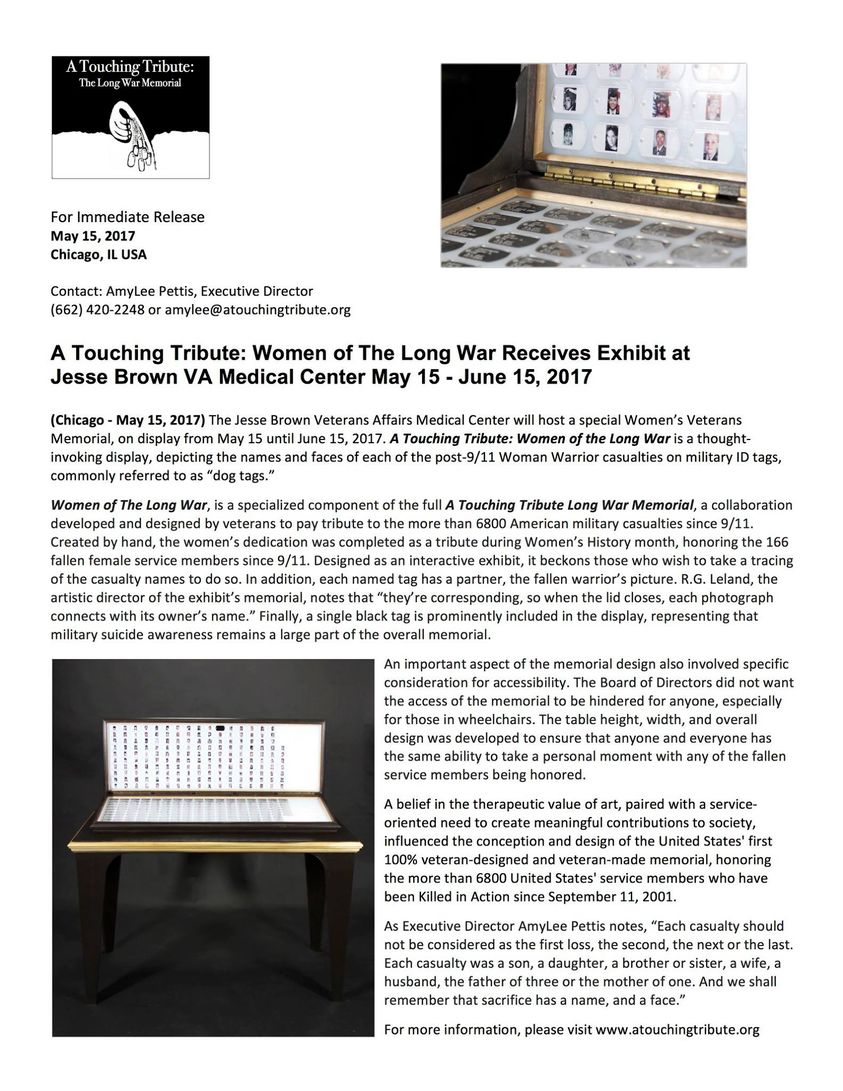 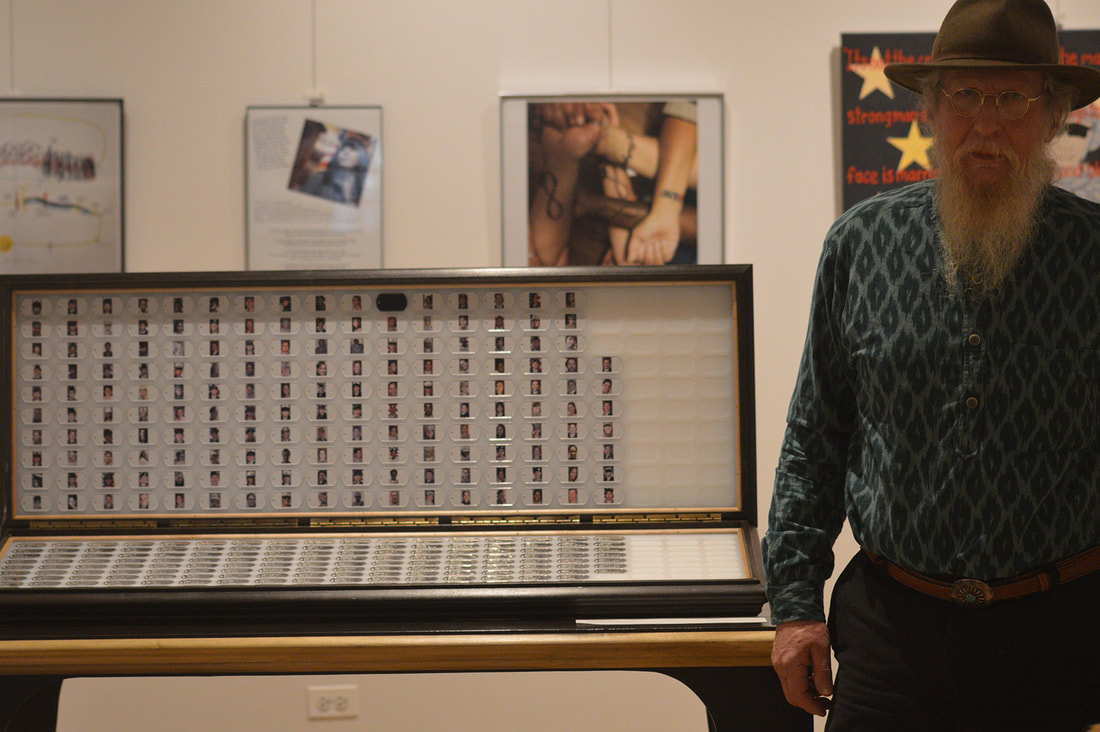 “I hope that people would see this and think about that title and not only think of warriors, but there are women–people. We all have a story–get some compassion, that’s what I wanna yell,” said Leland, the artistic director of the exhibit’s memorial at the Ukrainian National Museum, where handcrafted work by female veterans was featured.
The exhibit includes mixed media art, paintings, sculptures, drawings, and self-portraits but the main component of the exhibit is ‘A Touching Tribute,’ an interactive exhibition featuring the names and faces of fallen military women.

“ It was originally conceived and designed to allow current military members, especially if they’re in a wheelchair, to touch and do rubbings of the dog tags,” said Jerry Kykisz, curator of the Women of Courage Exhibit. “The ultimate goal of the touching tribute is to do exhibits that honor all the casualties post 9/11 and this particular box is the women’s box.”

A mixed-media self portrait by Annamae Taubeneck, a helicopter crew chief and veteran of the US Army. Taubeneck was the first female in her family to serve in the military.As of October 2016, there were over 2 million women veterans in the United States, and almost 20 percent of women veterans who were involved in conflicts in Iraq and Afghanistan were diagnosed with PTSD.
“All of the women that died since the 9/11 conflict began are represented here and they’re corresponding, so when the lid closes, their photograph connects with the name, a total of 166 names thus far and since women are more and more joining combat units, we left a little space for future applicants,” Kykisz said.

‘A Touching Tribute’ was the brainchild of Leland, 65. Leland’s background in pottery and his previous work on the Vietnam Veterans Memorial located along the Chicago riverwalk helped inspire him for the layout of this specific project.
Leland said: “It was kind of cathedral looking like the way the lines come together. You can touch, you can take a tracing and say ‘there’s my son or daughter,’ when you read it up, the face and the names match each other, when the lid closes there is still some light–it became real emotional.” .

Created by hand, over the course of about a month, the women’s portion of the memorial is part of a larger set of boxes that is designed to fit into the shape of a star and cover the space of a 150 square-foot room. Six boxes within the project hold 200 names and photos and the rest of the boxes hold 120 names; all of which are grouped by year. The single black tag in the box represents suicide awareness in the military.

Military Times has a database on its website that provided the names and photographs of individuals for the project and Leland sought out Logo Tags, a small business in New York City, which printed the tags. Coincidentally, Logo Tags invented the ball chain that is used by servicemembers who wear the dog tags.

Leland, who served alongside women and as a Navy diver for four years did not want the access of the memorial to be hindered for anyone.  “It does make it a little more meaningful that this is Women’s History month and these are women of courage,” Leland said. Many of the Navy women that I served with were experts in their field for sure. …I didn’t want to ever hear someone from a wheelchair not being able to have access.”

The ability to have a physical interaction with ‘A Touching Tribute’ models similar veteran memorials around the United States and offers the public an opportunity to share an intimate moment with the effects of war.

A close-up of ‘A Touching Tribute’ which allows the public to transfer tracings of the names of the women on paper.“When you look at the total exhibit, I would like people to be horrified in war…the overwhelmingness of it,” Leland said. “You look at it and you go ‘whoa.’ Maybe people will take away from it that there’s got to be a better way. …When you look at the photographs and say ‘wow, that could be my sister,’ ‘that was my girlfriend.’ Every sacrifice has a name and a face.”

For many veterans, like the women who submitted artwork for the museum and Leland, who worked on the Vietnam Veterans Memorial in the early ’90s and has used art as a type of calming therapy, creating pieces such as ‘A Touching Tribute,’ has helped him to be at peace.

“I knew that something had to help with the guilt, …Maybe it’s a brush stroke or the shape of a pot. …The only way to be at peace is to be at peace with everything, so touch, look and sight: those are the first ways that you can get there, that’s why I like it.”
Like Leland, and so many of the women who contributed to the Women of Courage Exhibit, it’s up to the newer generations of veterans to find an outlet for them to convey their stories and messages.
​
“There’s other guys out there like me, thinking like me, that’s kinda what I want for 9/11, the young guys to figure out, don’t wait until 20 years, start working on it now,” Leland said. “It did that to countless numbers of guys. It was like the museum saved us and maybe our new memorial will save some of [you] guys.”
© 2020 No text or photograph contained in the pages of this website may be reproduced without the expressed written permission of the artist and/A Touching Tribute: The Long War Memorial, a 501(c)(3) non-profit organization.