There is a fire truck operating on Long Island noted for its reach
Owned by the professional Fire Department of the City of Long Beach.
There is also a fireman there who has brought his Department great fame
His parents come from Connaught in Ireland Anthony is his name.
The dreaded call came in at three o'clock in the middle of the night
having worked for two whole days already this was no time for fright.
Working frantically to be properly dressed his equipment he strapped.
Then came another message over the radio there were some people trapped
not enough firemen showed up to form a crew he was treading on quick sand
And throwing caution to the wind he took out a truck that was undermanned.
When he got to the address he had been given the tension increased
there was no fire in the West it must be four blocks away over in the East.
Without stopping for any instructions he raced to this new address.
With the pedal to the metal he prayed he had made the correct guess.
He brought this huge monster to rest and from the cab he quickly hopped
When he saw this raging fire ahead of him his heart nearly stopped
No other trucks or firemen had arrived there were no water hoses in place
The rules said not to go into this fire alone there would be no disgrace
But the littlest fireman in the City who spent many summers in Athlone
Shouted to the others "connect the hoses I'm going in alone"
Minutes later he reappeared to cheers from neighbors for he had saved Maxwell
He turned very quickly and disappeared once more into the bowels of hell.
Outside Antonio and Hadrick were frantic trying to get him water
Inside he was thinking I must keep going it could be someone's daughter
Then crawling on hands and knees he made his way through the hot and hungry flames
And making a lot of progress towards the rear he came upon two door frames
He was losing energy from the long hours now he had to make the right choice
It was no good shouting for survivors for the flame would muffle his voice
With the linoleum melting all around him like a river of hot tar
He ignored the left door and decided on the right which was slightly ajar
The room was filled with thick black smoke and he came upon an empty bed,
The manuals he read in school told of what very likely lay ahead
Outside firemen were arriving and they had set up a make shift command
There was great concern for the fireman inside and his rescue was being planned
Still crawling on all fours inside he found an unconscious woman on the floor
He would have to pull or carry her through the flames for there was no back door.
He found his second wind he was elated that he had found her still alive
If he could get her out quickly without injury perhaps she would survive.
Outside old timers were working to their limits to get water on this fire
They knew he had been in there far too long and his situation must be dire
Antonio and Hedrick were quickly prepped to go in and bring out their mate
But told if dangerous conditions existed to evacuate
Inside in the interior they spotted two figures coming like shadows
but were being badly impeded by a wildly bucking water hose
Antonio took Glenna Hendric his mate, and when safe joyful tears were cried.
For because of the bravery of a Long Beach fireman that day no one died.
This unlikely trio led by the man of proud Rahara Roscommon stock
were instant heroes in Long Beach and beyond and the talk of every block
Their names with Maxwell and Glenna are now written in history's pages
And will be read about for generations by both wise men and sages
Anthony the first with Mayo and Roscommon parentage to wear fire gear
And the first to receive the medal for heroism and be "Man of the Year"
Tony Fallon wrote this poem in tribute to his son Anthony. 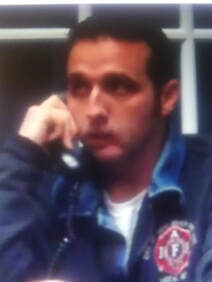 Anthony Fallon
Anthony has since been promoted to Lieutenant and I’m very proud to say he’s my son.

He took out a truck with less than minimum firemen and went into a fire alone and without water protection…..He is the first and only Long Beach Fireman to ever have 2 “saves” in one fire He is also the most Decorated Fireman ever in The City of Long Beach, Long Island New York. This was the most difficult poem I ever wrote. I completed it in 2016 for his birthday.

Biographical Info
Anthony Fallon was born in Manhattan, but grew up in Long Beach, New York.  At age 18, he joined the Volunteer Fire Dept. in Long Beach.

On Sept. 12, 2002, he became a member of Long Beach Professional Fire Fighters. A year before, he had been at the World Trade Center looking for survivors. At age 47, he has been a firefighter for 29 years and is also an EMS. On July 27, 2010 at about 3am, he answered a call and was the driver of the first truck to arrive at a fire in which there were 2 people trapped. Ignoring proper procedure, he went in alone, twice, without water protection and rescued both. He received the Nassau County Silver medal for Heroism and was co-person of the year. He has one son and a daughter.
​
Tony Fallon, Anthony’s father, is a writer/poet and radio show presenter. He has been the voice of Ireland in America for 43 years and the voice of America in Ireland on Roscommon Radio and Radio West in Mullingar. He was born in Athlone, grew up in Roscommon and now lives in Cairo, NY.  He has written about 750 songs/rhyming poems haiku’s and other forms of poetry. He is Poet Laureate of Cairo NY and has 2 other sons - Brian and Christopher.
© 2020 No text or photograph contained in the pages of this website may be reproduced without the expressed written permission of the artist and/A Touching Tribute: The Long War Memorial, a 501(c)(3) non-profit organization.